"Mitchell developed Marsinah to be a believable character, and it helps the audience empathize with her; she delivers one of the best musical performances in the show as well, placing a great deal of emotion into each of her songs."

“KISMET” WILL CONTINUE TO PLAY THROUGH FEB. 28 AT THE SPRECKLES THEATRE COMPANY.

The Spreckels Theatre Company presents one of the most recent stage performances of the 1953 musical “Kismet” which contains a lively setting, exhilarating performances, and a faithful adaptation of the musical (a fact that is both a strength and weakness of the show). The collaboration between director Gene Abravaya, music directors Diego Garcia and Lucas Sherman and the choreography director Michella Snider for this show created a magical experience of a show.

“Kismet”, based on Edward Knoblock’s 1911 play of the same name, takes place in a fictionalized version of Baghdad. The story centers around Hajj, a beggar poet (Tim Setzer). He and his daughter Marsinah (Carmen Mitchell) try to find ways to escape poverty, including trying to find a rich bachelor for Marsinah to marry. Along the way, Hajj poses as a wicked sorcerer that shares his name, which leads to a series of mishaps for him. A man named Jawan (Dwayne Stincelli) kidnaps him, as the real Hajj placed a curse on him years ago and took away his son, and lets him go with 100 gold pieces only after Hajj promises to track down his son. Hajj is then caught by the policeand is placed on trial for theft; conveniently, Jawan shows up to the trial demanding Hajj for his son, and discovers that the Wazir (Harry Duke) is his son.

This discovery leads to everyone believing Hajj to actually be a wizard, including the Wazir and his wife LaLume (Brenda Reed). Realizing he has a curse placed on him, the Wazir puts Hajj in a place of political power and they settle on a deal-if the Caliph (Jacob Bronson) will marry a princess, the curse will be lifted. However, unknown to them, the Caliph and Marsinah have met and are in love with each other. It doesn’t help that LaLume and Hajj start to form an affair. Now all of them must take action to lift the curse placed on them all.

As aforementioned, the cast is phenomenal. Setzer delivers his performance of Hajj with a lot of enthusiasm, making him a charming lead. The only issue is sometimes his singing wasn’t as great as it could be, but because of how he puts so much enthusiasm into it, it’s still enjoyable to listen to. Mitchell developed Marsinah to be a believable character, and it helps the audience empathize with her; she delivers one of the best musical performances in the show as well, placing a great deal of emotion into each of her songs. Duke portrays the Wazir as enjoyably over the top. Reed balances an exhilarated yet subdued portrayal of LaLume perfectly, including in how she plays off of Hajj and the Wazir.

The background characters such as beggars, dancers, princesses, etc. were also portrayed wonderfully. Despite not having many lines, their performances were vibrant with the assistance of wonderful choreography and singing.

The music in the show is fantastic. It incorporates a variety of different types of songs to carry along the story, and the orchestra delivers the music flawlessly. The soundtrack ranges from bouncy, colorful songs to deliver the magic of the setting, to softer, more emotional songs to develop the characters. In addition, the choreography is phenomenal. It always matches perfectly with the songs, and captures the attention of anyone watching it. And the set and costumes are just as, if not more colorful. The set works with a simple set of props that depending upon how they’re set up, work great with the current scene. And the costumes are all uniquely designed and very interesting to look at, and play a major role in how we remember the characters.

Without all the aforementioned elements and a enjoyable deliverance in general, the story is not as enjoyable as it seems. It’s very complex, and while it’s easy to follow the characters, it can be difficult to figure out every single detail as to how they came to develop. It doesn’t help that the story could’ve used a bit of an update for the performance, for it really shows it’s from the 20th century and can lose someone who may not be as blown away by how it’s portrayed.

Overall, however, it’s not necessarily the content that matters, it’s the delivery. And this is a very enjoyable, exhilarating delivery that has a lot of heart placed into it and driven by a very strong cast, orchestra, and choreography.

Whether one is a fan of the original or not, the performance will still provide a whimsical experience for many viewers. 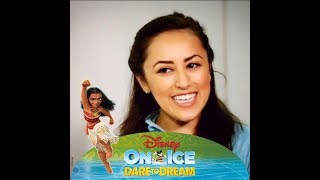